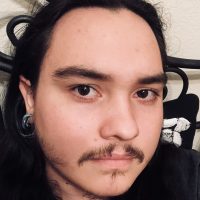 Felipe Ojeda is an Austin, Texas-based producer, sound designer, and freelance audio engineer, who has worked on projects for several podcasts, including Horror Hill, Terror Under Ten, and the Simply Scary Podcast.

Ojeda was born in Galveston, but grew up in his small hometown of Winnie, Texas. After high school, he attended LAMAR State Collage of Port Arthur, where he graduated with an Associates degree in Commercial Music / Sound Engineering in 2015.

After graduation, Ojeda worked as a freelance audio engineer, running sound for local bars, clubs, and churches. He is a self-described “musician by heart,” and plays guitar, bass and piano.

“My love of music and the horror genre lead me to starting my own YouTube channel where I read/narrate scary stories as well as arrange my own music,” Ojeda says. “I post under the name TheGhostOf94, I also have a SoundCloud where I have all my composition posted for free listening.”