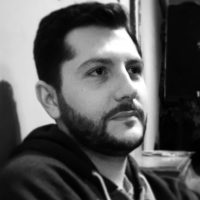 Brian Martinez is the author of more than a dozen works in the science fiction and horror genres, starting with his apocalyptic debut A Chemical Fire. A deeply personal blend of loss, science, faith and humor, A Chemical Fire established many common themes in Martinez’s writing.

Martinez has also penned three installments in his Dark Urban Fantasy series The Obscured, as well as one Kindle Worlds title for Nicholas Sansbury Smith’s Extinction Cycle. His current project, The Vessel, is an ongoing Space Horror serial which has been compared to a mixture between Dead Space and The Island of Doctor Moreau.

Martinez studied Film at Long Island University, where his short films played at the annual festivals. His works have appeared on screen and in print, and have been adapted to audio for YouTube, podcast, and audiobook listeners. He lives on Long Island, New York with his wife Natalia and their pack of wild dogs. For more information please visit his website at bloodstreamcity.com and sign up for his mailing list to receive free stories and news of future releases.