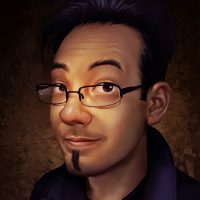 David Romero is the born-in Tucson, AZ, Texas-based lead art director for The Simply Scary Podcast, as well as a staff illustrator, animator and video editor, skilled in the production of a variety of mediums.  A graduate from the University of the Arts in Philadelphia, PA, Romero’s illustration work can be seen on his DeviantArt page, where he has been an active contributor for more than 6 years, and on his Tumblr blog. His animation portfolio available for viewing publicly on Vimeo.  In addition to his work with The Simply Scary Podcast, Romero is the creator and illustrator behind Corpse Planet.

Romero says, “I’ve always had an affection for the arts, especially since I grew up watching animated films likeSecret of Nimh and Nightmare Before Christmas.

“When I had moved to Philadelphia to study at University of the Arts, I had actually wanted to major in film. But I soon realized that I could express my ideas more freely in animation, so I settled on making that my major. I had always wanted to merge the animation medium with the horror genre, since both carried a lot of potential and not too many examples existed of the two being blended in an effective way.

“It was in my animation courses where I met my girlfriend, Giselle Rosser (who helped to animate and voice all of the creatures in my short films and is a fantastic animator in her own right).

“Since graduating UArts, I got to work making animated horror shorts that I could submit over to festivals to get a feel of the process. During this time, I took up some freelance illustrating to practice on my storytelling for personal projects. I’ve been experimenting ever since, mixing mediums for my shorts and illustrations and am currently working on my Instagram horror story, noc_ternal.”