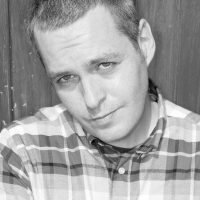 Adam Howe writes the twisted fiction your mother warned you about. A British writer of fiction and screenplays, he lives in Greater London with his partner and their hellhound, Gino (yeah, you got it; Steven Seagal’s character in Out for Justice).

Writing as Garrett Addams, his short story Jumper was chosen by Stephen King as the winner of the On Writing contest; the prize was publication in the paperback and eBook editions of On Writing, and an audience with “The King”, where they mostly discussed slow vs. fast zombies.

Howe’s short fiction has appeared or is forthcoming in Nightmare Magazine, Horror Library 5, FEARnet, One Buck Horror, Mythic Delirium, Of Devils & Deviants, Plan B Magazine, and Bête Noire. His first novel is under construction. Be warned.