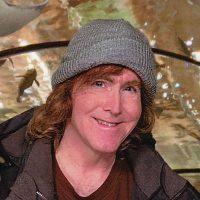 Brian Hodge is a multi-genre author of horror, crime, and fantasy.

Hodge, called “a writer of spectacularly unflinching gifts” by no less than Peter Straub, is the award-winning author of thirteen novels of horror and crime/noir. He’s also written over 130 short stories, novelettes, and novellas, and five full-length collections. His most recent collection, 2011’s Picking The Bones, became the first of his books to be honored with a Publishers Weekly starred review. His first collection, The Convulsion Factory, was ranked by critic Stanley Wiater among the 113 best books of modern horror.  The aforementioned titles and more can be found on Amazon.

He lives in Colorado, where he also likes to make music and photographs; loves everything about organic gardening except the thieving squirrels; and trains in Krav Maga and kickboxing, which are of no use at all against the squirrels.