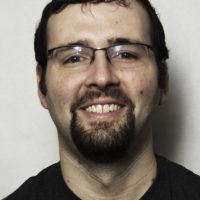 Darren Todd writes short fiction full time, along with freelance book editing for Evolved Publications and narrating the occasional audiobook for Audible, Inc. His short fiction has appeared in thirty-one publications over the last twelve years. He has had four plays produced and a non-fiction book published. A listing of available titles can be found on Todd’s Amazon author page.

So far in 2018, his work has appeared in the Pickman Press anthology Corporate Cthulhu, in Silver Empires’ Secret Stairs anthology, and most recently in Beneath the Waves: Tales from the Deep.

While some of his stories fall under the literary umbrella, he always returns to horror. His style and reading preferences tend toward the psychological, as he enjoys stories that linger in the imagination long after he’s closed the book on them.

He lives in Scottsdale, Arizona with his wife and son, and does his best work in coffee shops on a dated word processor.