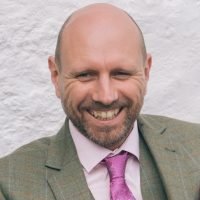 David Sharrock is a 43-year-old artist and writer with a deranged interest in scaring people with words, a personal amusement which never seems to get old. He lives in a small haunted cottage on the Cornish coast in the company of his wife, two children and a spectral girl who likes to hide the car keys.

Sharrock sometimes writes the odd horror story on Reddit’s NoSleep under the pseudonym Suddenly Satan and is best known for his tales, Mummer Man and The Weirdness, both of which feature in Reddit’s all time best-of index (single story and series compilation categories).

David’s debut novel Transitor – a science-fiction horror based on the notion of futuristic modes of transport – was published in 2012, and described by one critic’s review as, “a sprawling, epic tale of a high tech future where humans and synthetics exist alongside each other, where transport to distant worlds isn’t just possible, but routine.” An interview with Sharrock regarding his debut novel is available here.

Of the novel, the critic went on to say, “Transitor is an exceptional novel of scope and manages to ask some very serious questions without getting bogged down despite some very detailed technical information. The plot is very original, thought provoking with just the right pace, filled with rich and detailed characters. This is hard science fiction as it should be and no reader of science fiction should miss it.”