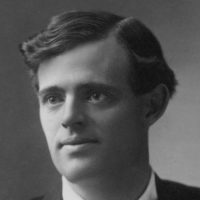 A pioneer in the world of commercial magazine fiction, London was one of the first writers to become a worldwide celebrity and earn a large fortune from writing. He was also an innovator in the genre that would later become known as science fiction.

London grew up working-class. He carved out his own hardscrabble life as a teen. He rode trains, pirated oysters, shoveled coal, worked on a sealing ship on the Pacific and found employment in a cannery. In his free time he hunkered down at libraries, soaking up novels and travel books.

For much of the last decade of his life, London faced a number of health issues. This included kidney disease, which ended up taking his life. He died at his California ranch, which he shared with Kittredge, on November 22, 1916.