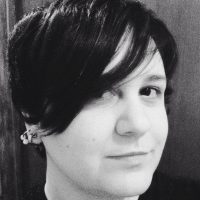 Jack Mason is an artist and writer from New York City who has been writing since the age of six. Growing up, she was always interested in dark and spooky things, though her love of horror came later in life at the age of twenty-three, when she and a friend had a marathon of horror films. She has been hooked ever since.

Mason’s official blog – Three Deep Breaths – contains pieces she has written, such as poems and essays. She also writes stories, such as the ones that can be found on her horror blog. In addition to the horror blog, Mason posts on a personal blog, which has a number of essays that will appear on Three Deep Breaths in the future, that can be found here.

When not working on her own projects, Mason writes for the Fierce Ferret Foundry, of which she is a proud team member. She has written for the web comic “Dungeon Minis,” and has made contributions as a co-writer for an upcoming video game being developed by the group.

When she is not writing, she can be found with friends, playing video games, or plunging head-first into rabbit holes on the internet.