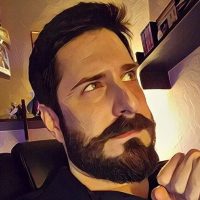 Born and raised in the Appalachian hills, John Casuccio grew up running through the woods of Morgantown, West Virginia. Some of his earliest memories, at age 3 or 4, are of an owl watching him at night. First it was in the tree outside his second floor window. Later it was in his room, perched on nothing several feet in the air. This went on long enough that he had to learn to confront his fear or go on being paralyzed by it.

From then on, Casuccio began looking at fear as something to be shaped and played with like clay. Before long his floor was littered with drawings of the owl and the monsters he imagined living in the dark corners of his house.

When he was older and started school, Casuccio fought social anxiety by making up scary stories: The soccer practice he had to go to was secretly held on an old graveyard. Basketball courts were made out of wood from reclaimed coffins. The new classroom of students had one kid that was always there, year after year, and no one noticed that he never got older. To this day, Casuccio’s comfort zone is sitting in a dark room working on his next charcoal illustration or typing away at his next scary story.

Casuccio’s wife, Rachel, is the only person that has ever made him feel truly welcome in a life other than his own. She tolerates his love of all things dark and spooky with a little fascination and a lot of head shaking. It’s only thanks to her that he felt compelled to share one of his stories with Chilling Tales for Dark Nights. “They’ve been incredibly supportive,” Casuccio says, “giving me the motivation to continue working on the art of ruining a good night’s sleep.”