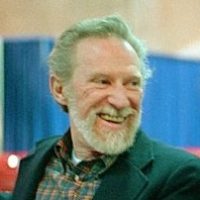 John Morressy (December 8, 1930 – March 20, 2006) was an American science fiction and fantasy writer and a professor of English at Franklin Pierce College.

He earned his BA in 1953 from St. John’s University and his graduate degree in 1961 from New York University.

In a career that spanned 40 years, Morressy published more than 25 novels and short story collections, as well as poetry and nonfiction, much of which has been published in several languages. His best known series, the Kedrigern Chronicles, was published between 1986 and 2003.