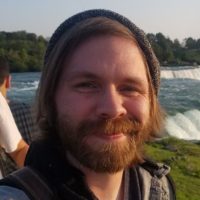 Jonathan Reiman spent part of his childhood in a centurion home in downtown Elyria, Ohio, where many strange and unexplained events sparked his desire to tell stories.

Following this, he worked as a camp counselor for 10 years, where all of the strange occurrences of his life seemed to culminate. Nightly he was asked to tell the kids stories, and he eventually won the camp’s best storyteller award (the only award he’s ever cared about, save for the summer he beat his best friend, Jake, for best hair).

He graduated from Cleveland State University with a degree in Psychology, and used to make ridiculous YouTube videos that only he found comical. He is currently running the art department for a company in Cleveland, while still managing to write and scare people in his spare time.

His favorite quote, ever, was from the mother of one of his campers he ran into years later: “Are you the reason my son, who is in the army, won’t sleep in a room with a mirror?”