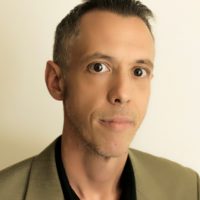 Kaleb Banning Kellum, better known as K. Banning Kellum, is a writer and documentary actor from New Orleans, Louisiana, and a 7-year veteran of the United States Army, deployed twice to Iraq during Operation Iraqi Freedom.

In 2004, Kellum starred in the pilot of Ghost Detectives, a documentary on haunted New Orleans landmarks produced by October Productions. The pilot was never aired. Later that year, Kellum worked with Animal Planet and appeared on The Most Extreme Super Sharks, portraying himself once more. Kellum also worked with local New Orleans networks in investigating the “vampire” subculture that was popular during the early 2000’s, working briefly with now Louisiana House of Representative member Helena Moreno.

In 2014, Kellum shifted his focus to writing. He has completed several popular works of urban fiction featured on the Creepypasta Wiki and International publishing house, Sweek. In 2015, Kellum wrote the re-imagined telling of legendary internet horror story Jeff the Killer as well as several sequels. His version of the popular tale, entitled Jeff the Killer 2015, officially replaced the original story on the Creepypasta Wiki. In literature, Kellum is most known for his Hyraaq Tobit series.

In 2015, Kellum’s work was published in the horror anthology, We Go Bump III: The Children Are Well-Behaved (Volume 3), now available on Amazon.com.

Kellum currently resides in New Orleans, Louisiana with his wife Neomi and son Tristan. Kellum credits his inspiration for writing to his love of family and the esoteric beauty of his beloved New Orleans.