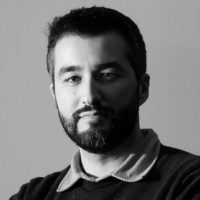 Kris Straub is an American cartoonist, online web artist, self-professed humor scientist, and the author of the infamous “creepypasta” horror story Candle Cove. Some of his other works and best known artistic feats include Checkerboard Nightmare, Starslip, Chainsawsuit, and F Chords. He is also an ordained minister, as well as co-founder of Blank Label Comics and Halfpixel. He also co-created and managed the series “Blamimation with Kris and Scott”, an animated series.