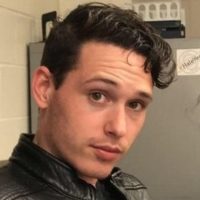 Maxwell Malone is Michigan native who currently resides in Manhattan, Kansas. He is a horror author whose poetry and prose has been published a number of times. He grew up on a farm before moving to Iron Mountain, MI, and recently graduated from Finlandia University in Hancock, MI with a Bachelor’s Degree in Liberal Arts English.

Malone’s main influences are the works of H.P. Lovecraft, Clive Barker, Flannery O’Connor and Neil Gaiman, as well as The Twilight Zone and ’80s horror films.

Malone is a well-known author on Reddit’s popular Reddit NoSleep forum. He has also had a number of his tales adapted into audio by the award-winning NoSleep Podcast, as well as Chilling Tales for Dark Nights, and previously worked for Chilling Tales: The Podcast as Interview Coordinator.

Malone writes as a hobby while pursuing a career path as a Professor of Composition and Rhetoric. He has been an avid horror fanatic since he was incredibly young, primarily thanks to his father’s taste in SyFy movies. On top of this, he is incredibly interested in the philosophies and scholarly aspects that can be gleaned from the genre. Other hobbies include “video games, adventuring… and video games.”