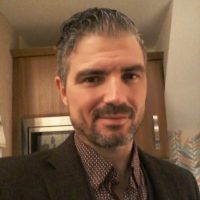 Stephen Bacon was born in Nottinghamshire, UK in 1971, although he has spent most of his life within the confines of South Yorkshire. His parents bought him a collection of Arthur Conan Doyle’s Sherlock Holmes stories when he was nine years old, and from then on he was lost to the written word.

Bacon’s short fiction has been published in Black Static, Shadows & Tall Trees, Cemetery Dance, Crimewave, Postscripts and Nightmare Magazine, as well as in many other acclaimed anthologies, and has been selected for Ellen Datlow’s Best Horror of the Year series. His debut collection, Peel Back the Sky, was published in 2012 and was nominated for a British Fantasy award. He is the author of the novellas Lantern Rock and Laudanum Nights. Forthcoming is his second short story collection, Murmured in Dreams, from Luna Press.

An accumulated listing of all of Bacon’s published works can be found on his official website.

Bacon currently lives in South Yorkshire, UK, with his family and an increasingly large collection of paperback books. You can visit him at www.stephenbacon.co.uk or @BaconStephen on Twitter.