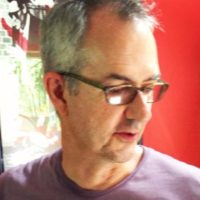 Tony Knighton is both an author and a lieutenant in the Philadelphia Fire Department, a thirty year veteran. Born in western Pennsylvania near Pittsburgh, his family moved to Philadelphia when he was seven. With the exceptions of a short stay in Toronto, Ontario, and the military, he’s been in Philadelphia ever since.

His novel Three Hours Past Midnight, as well as his novella and story collection Happy Hour and Other Philadelphia Cruelties, have been published with Crime Wave Press. His story “The Scavengers” is included in the anthology Shocklines: Fresh Voices in Terror, published by Cemetery Dance, as well as in Year’s Best Hardcore Horror: Volume 1 from Comet Press. and his story “Sunrise” is included in the anthology Equilibrium Overturned, published by Grey Matter Press. He has also published short fiction in Static Movement Online and Dark Reveries.

In addition to his work as a fireman, he has also worked on the side as a roofer for many years. Knighton served in the United States Marine Corps, and attends classes sporadically at Community College of Philadelphia, where he met his wife Julie, an associate professor of English.