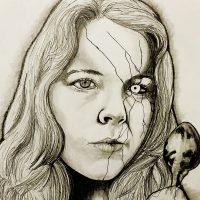 Ashley Tolfo is a voice actress for Chilling Tales for Dark Nights and the Simply Scary Podcast. Tolfo has been an ardent horror fan since the age of 12, when she read her first horror novel, “Everything’s Eventual” by Stephen King. She has been mimicking voices since she was a child – annoying her relatives to no end – which led her to become a State Qualifier in Speech in Debate in the Humor category for her performances and voices. Her favorite type of horror is the kind that makes you think, with believable characters and a solid plot. Today, she loves browsing creepy Reddit forums, watching documentaries about serial killers and true crimes, binge watching scary YouTube channels, and still reads Stephen King to this day.