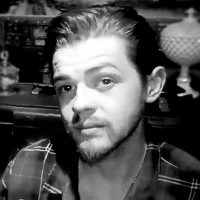 C.C. Childers considers himself a dedicated and devoted individual. He counts among his interests reading, baking and making music. Five days a week he works hard as a farmhand, with Otis Jiry and all his all other favorite narrators “in his ears the whole time.” Living in as rural an area as where he is, Childers says, “It helps to lend a special creepiness to the special world of nightmares I’ve built in my mind. Especially at night.”

Childers says, “I believe acting is an intrinsic part of human nature, from making nice with that person at work who doesn’t support the same football team as you, to dodging bills, to telling someone who is about to be eaten that there definitely isn’t a monster behind them, all so that you can escape while they get to be the snack. Acting is important, and everyone does it. I am very glad that audio drama is making such a comeback nowadays, as it provides such wonderful ambiance  to a world that has a tendency to be mundane every now and again.”

Childers says his dream hasn’t always been to be a voice actor, but it brings him a great deal of joy, and he hopes to share that feeling with like-minded peers.