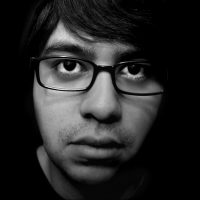 Born and raised in the New England area, Chazz Ravenelle is a creator who specializes and practices various art forms such as voice acting, writing, sound design, video editing, after effects compositing, photoshop, and more.

The prospect of Ravenelle’s creative diversity ensued when he attended a charter art high school in 2009, where he learned and experienced the wonders of stage acting, stage management, playwriting, screenwriting, and video editing. Ravenelle won two acting awards (one for the stage, another for the screen) and was nominated for a film editing award during the time in which he attended the school.

In 2013, Ravenelle’s creative drive re-emerged after having met long-awaited friends and trusted colleagues through YouTube, where he decided to reinvigorate his accustomed skills as a writer and film editor, while also exploring a new craft: voice acting.

After partaking workshops and online courses regarding his interests (as well as undergoing years of research, studying, and experience), Ravenelle developed the skills listed above and has since been involved in various projects on YouTube. He has devoted time, money, and ethics to works creditable of high view counts (ranging from thousands to even millions) as a voice talent, writer, script editor, audio producer, and VFX artist, amidst stoking his natural fixation for learning and cultivating new skills.