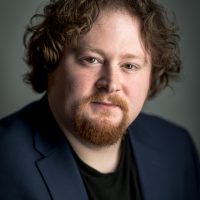 Christopher Keegan grew up in Hebden Bridge West Yorkshire. At the age of 20 he moved to London to pursue a career in acting. He trained at Drama Centre London where he received a B.A. (Hons) in Acting.

He fancies himself a “true renaissance man,” specializing in magic and illusion, acting, singing, Rubik’s Cube solving, lock-picking, escapology, nose flute playing. He also considers himself an expert on the subject of the ghost stories of London theaters.

Stories of Theirs Featured in the Following Episodes