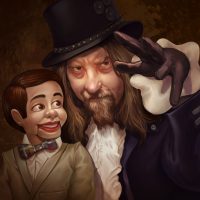 Jesse Cornett is the Wisconsin-based audio engineer, sound designer and composer, as well as a regularly featured voice talent, and has been a long-time contributor to both Chilling Tales for Dark Nights and The NoSleep Podcast. Prior to working on The Simply Scary Podcast, Cornett produced over two dozen episodes of Chilling Tales: The Podcast.

Born in Atlanta Ga. and raised in the northern part of the peach state, Jesse married and moved his growing family across the United States. Exploring different regions for opportunity was valuable experience in his budding career.

A retired band musician and frontman with the band Method-1, Jesse developed a keen ear for music and flair for dramatic showmanship from an early age with no formal training. In 2007, while in recovery from a severe set of injuries, he developed his skills recording, mixing and producing music with a solo project from a hastily rigged home studio. With meager funds and beginnings, he recorded 3 albums worth of material for the Experimental Alternative music project code-named: Son of Man and developed a production company; Pleroma Productions through which to release this material.

In 2013, after encouragement from fellow co-worker Craig Groshek, Jesse was chosen to narrate a story for Craig’s horror theater channel on YouTube, Chilling Tales for Dark Nights. Jesse was able to turn his music production experience into sound engineering skills and produced 4 fully edited narration takes for the story “Ability.” Craig was impressed by the vocal range of each of these audition takes and went on to feature Jesse in several roles of extensive dialogue and length, covering many different international and regional accents.

Jesse continued to grow into different roles for Chilling Tales, showing eagerness to engage in any and all tasks associated with the site and YouTube channel. With coaching and guidance by Craig Groshek and fellow Executive Producer Jeff Clement, Jesse developed his talents and honed his ear to tackle controversial content and extreme roles and storylines. He has created atmospheric scores, original music, frightening creature effects and brought unbelievable characters to life.

Jesse is extremely excited to bring his creativity and ideas to new audiences. He says he cannot wait to “throw you headlong into my mind and introduce you to the constant carnival freak show that plays in my head…”