Posted at 00:00h in Chilling Tales for Dark Nights by The Simply Scary Podcast 8 Comments
Share this Episode 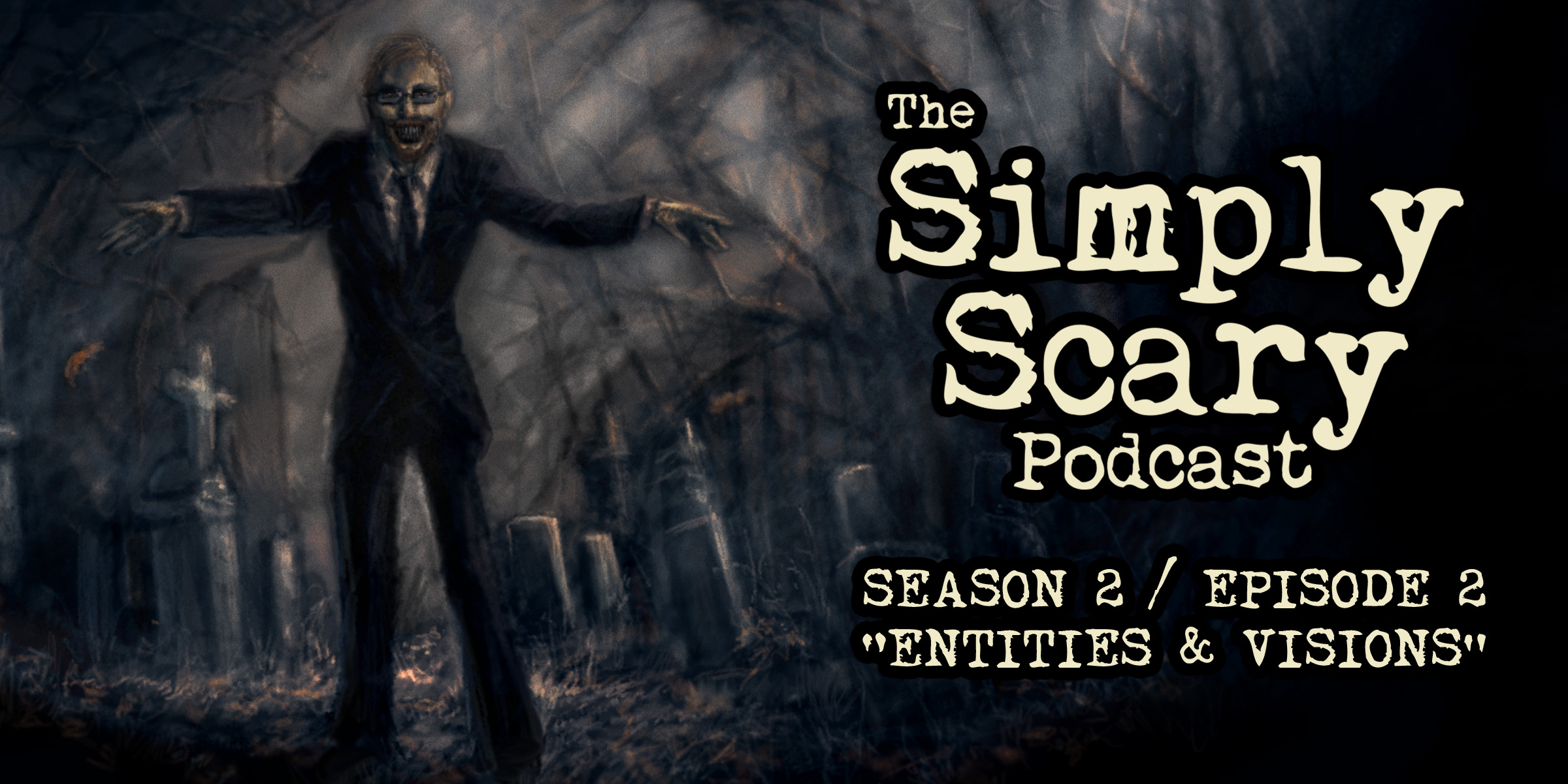 Welcome to Season 2, Episode 2 of The Simply Scary Podcast. This episode of our program is hosted by G.M. Danielson.

In this episode we have assembled this convocation to undergo an expedition of haunting proportions, for we are summoning and being summoned. Prophetic perception taps into a realm that drips with malignant spirits and death is everywhere. Our tales promise to besiege you with consternation, so beware of this episode’ “Entities and Visions.”

A NOTE TO LISTENERS: The episode available here features the first two stories only. To access the full-length, advertisement-free episode, which contains all four stories, sign up to become a Patron today at Chilling Tales for Dark Nights. In our Patrons-only members area, you’ll get access to HQ MP3 copies of all of our podcast episodes – totally free of advertisements – plus access to hundreds of stand-alone audio horror productions dating back to 2012. You’ll also be helping to support this program and the team that bring it to you every week.  Thank you for your support!

“The Conversion” written by Daniel Cornell and performed by Jesse Cornett, featuring John Evans (Bartholomew Basso), and Brindolyn McNair (Mrs. Basso). Production and score by Jesse Cornett. This is the story of a priest who is newly confirmed and eager to prove himself to his congregation, the hierarchy, and the almighty. When a seemingly harmless request from a parishioner puts the young Father in audience with a supposedly reformed heretic seeking guidance from the Church, the figure faces the priest with a decision he must pray upon. But will that decision put him and his faith in mortal danger?

“Everybody Loves a Parade” written by Charlie Davenport and performed by Jason Hill, featuring Olivia Steele (Shelby). Production and score by Ronnie Dickison. Peter has had a recurring vision since moving to California to raise a family. His surrealistic experiences portend the coming of something wicked indeed. But it is the eventuality of his nightmare that will haunt him in ways he couldn’t possibly imagine.

“Abandoned” written by Sandra R. Campbell and performed by Olivia Steele, featuring Marshall Ragsdale (Luke) and Jesse Cornett (Uncle Jay). Production and score by Ronnie Dickison. In this tale, we join a young woman recounting the night her family was torn apart. But her Father’s way of dealing with the tragedy sets up events that will be even more horrifying than the you would dare to believe.

“The Seer of Possibilities” written by Thomas O. Wagner and performed by Jesse Cornett, featuring Joseph Gable (Jack), Ashley Tolfo (Donna), Jordan Lester (Allie) and Eden (The Seer). Production and score by Jesse Cornett. This story demonstrates that everything happens for a reason. In it, we join an average office worker as he begins to receive strange messages on his computer. The enigmatic entity gives him seemingly harmless, little “tasks” to accomplish. His small tasks become a long-lasting effort and rewards seem to follow their completion, often with grave consequences for others. Soon the repercussions of his actions culminate in a horrific realization as these events unfold in terrifying reality.

Great stuff ass always!! Thx for putting it out there and keep em coming!!

When is the next episode coming? This one was fantastic but it seems like I have been waiting for episode 3 for ever now. Are you guys only doing episodes bi-weekly now? Even at tha,t seems like it had been longer. I’m hooked I SIMPLY need more SCARY.

This is my favorite episode thus far! Way to go, guys!

Thanks for the kind words! We’re glad you enjoyed it!

I love the Irish brogue of the “heavy Italian accented” Bartholomew in the first story.
Kidding aside, you guys do a great job, and I really enjoy listening. Very entertaining.

I loved this podcast from the start. Discovered it about5 months ago from a link in the noctrium library. Wish to become a patreon,but I live in Asia and few dollars of money is a big sum. Hope to subscribe when I grow older. Best of luck for future series.

Thank you for the kind words, Anne, and best of luck to you!