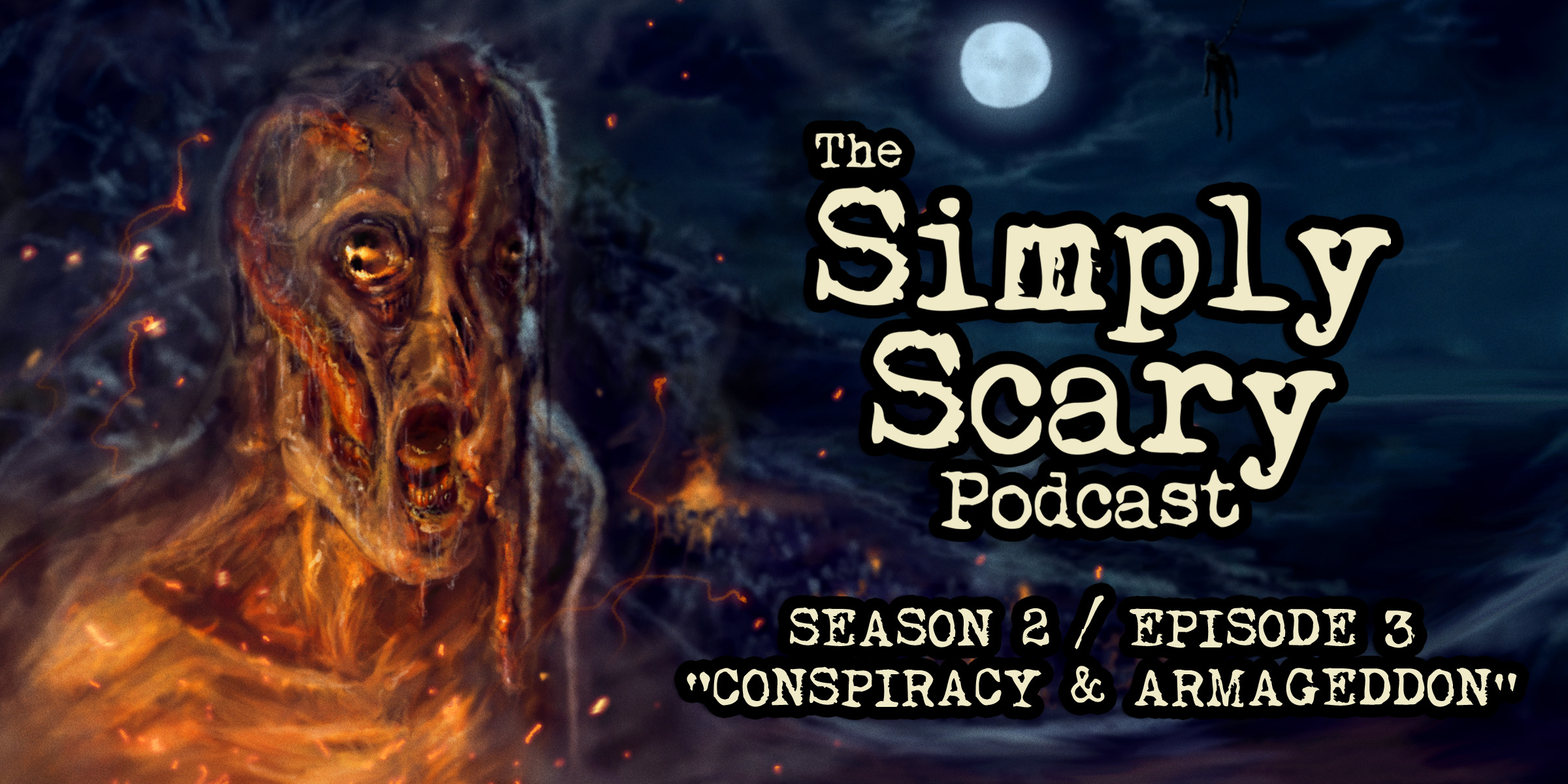 Welcome to Season 2, Episode 3 of The Simply Scary Podcast. This episode of our program is hosted by G.M. Danielson.

Collectively etched into our psyche is the fear of the comet and doom from above, while the shadowy reflections of our mind wonder if the world we inhabit is as real as our five senses lead us to believe. Our guilty consciences secretly fear judgment while nature’s signs portend doom from below. Top that off with the fear of an overreaching authority that may not be trustworthy in fully disclosing facts, and you have a hearty recipe for horror – Simply Scary style! For this collection of creepiness, it is our pleasure to render you closer to your ending, by beginning a journey towards the naked abyss of ever-changing realities, parallel dimensions and cosmically-scaled horrors that are the harbingers of “Conspiracy and Armageddon.”

A NOTE TO LISTENERS: The episode available here features the first 3 stories only. To access the full-length, advertisement-free episode, which contains all 6 stories, sign up to become a Patron today at Chilling Tales for Dark Nights. In our Patrons-only members area, you’ll get access to HQ MP3 copies of all of our podcast episodes – totally free of advertisements – plus access to hundreds of stand-alone audio horror productions dating back to 2012. You’ll also be helping to support this program and the team that bring it to you every week.  Thank you for your support!

“Thaw” written by Cameron Suey and performed by Nick Goroff. Production and score by Jesse Cornett. Join our subject in a slow process of realization, as he comes to a frightening conclusion about his long-endured, disorienting current situation.

“The Truth Behind the Mandela Effect” written by J. Delaney and performed by Steve G. Production and score by Jesse Cornett. Millions of people all around the world have attested to the fact that there is just something different about the current reality we exist in, where small changes have seemingly slipped by unnoticed, while systematically evidence is being scrubbed away right before our eyes: movie quotes “falsely” remembered en masse, longtime corporate logos suddenly changed, and even human anatomy altered irrevocably with no one the wiser. Is it a collective misremembering of specific facts? Is it mass hysteria? What if something is changing it for its own wicked purposes?

“What I Saw Beneath the Riptide” written by Elias Witherow and performed by Atticus Jackson, feat. Otis Jiry. Production and score by Jesse Cornett. In this parable from Purgatory, we learn the true meaning of the word “apocalypse,” as a man is faced with his own watery death and an even more hellish reality is revealed to him. The horrors of this distorted realm become increasingly overwhelming for him as a menacing presence looks on in stark, cold silence. The Hanged Man cometh… and he cometh… for you…

“When Gods Blink” written by Alex Sinclair and performed by Christoper Keegan. Production and score by Jesse Cornett. A mildly savant genius discovers a pattern within random data after his curious and obsessive nature leads him to delve into mounds of raw numbers. As he reveals to his friend more about a mysterious anomaly that is being covered up by the governments of the world, he realizes that we have been unknowingly sending a message with our everyday activity… and as it turns out, our message has been received.

“Calculations” written by Jon Patrick and performed by Jordan Lester. Production and score by Jesse Cornett. An astrophysicist discovers a strange deep space object that proves to be difficult to verify. Our intrepid observer desperately searches for proof and an audience willing to believe this important discovery, as the horrific true nature of the event is revealed.

“The Sounding of the Fifth Trumpet ” written by Derek Hawke and performed by Josh Irish. Production and score by Jesse Cornett. This tale takes you to the Pit and beyond, where you will play your part in the unfolding of a cycle that is as old as the ages.