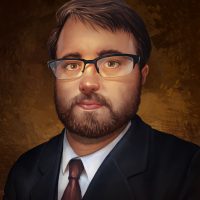 Christopher Buza is a lifelong fan of the supernatural, from Tolkien to Lovecraft to Carpenter. He expresses this passion through his work as a writer, editor, musician and library assistant. He earned his Bachelor’s in English Literature from Fairfield University in Connecticut. Aside from his work with Chilling Entertainment, he works as a freelance editor.

Of his experience, Buza says, “I’ve been writing and editing for about as long as I’ve been playing both heavy metal guitar and ‘Dungeons & Dragons.'” His personal interests range from Irish mythology and “weird fiction” in the style of H.P. Lovecraft to poetic waxing on Swedish heavy metal and personal essays on profanity. He counts “Aliens” and “Big Trouble in Little China” among his favorite films of all time.